Lucky 21 PAX posted in the Christmas Eve gloom (albeit a bit later than usual –0700 — yes, sleep is a crutch, but it’s not sooo bad to partake in some extra every once in a while) for a special F3 family convergence beatdown from the Paynes. While Fishfry gave us the 12 Days of Christmas on Friday last, Ms. Rogue “Payne” was eager to continue the theme with a 12 days of Christmas Eve, which thankfully was slightly different. Fishfry did express concern when YHC introduced the 400 yd track run as one of the first exercises, but alas, we altered the rules for this one, and the PAX were not required to repeat the exercises each time through…thankfully for all.

Count off by 2s to form two teams. Rogue enthusiastically explained each of 12 different exercises the teams had to complete, that were written onto tennis balls..er little yellow Christmas balls (LYCBs)! Team members must run down the field, ring the abnormally large jingle bell, run back to a LYCB, pick it up and bring it to the endzone where their team awaits in the rest position of choice (plank or squat…or frankly, simply standing around thinking about their favorite rest position). After each exercise is completed, a new team member must sprint down to the big jingle bell ring it, and repeat the procedure until all 12 LYBCs are back with the team. First team finished wins!!

The competition was stiff, even with Bone sprinting ahead during the 400yd run to grab a LYCB far ahead of the opposing team. But it all came down to an M and 2.0 sprint off, and well…the 2.0, FiA FNG RedCard, took the trophy against momma, FiA Rogue. The ol’passing of the baton kind of thing. It’s beautiful really.

The PAX then moved on to a series of escapades, performing some reindeer chasers (not the liquid kind), a version of Duck, Duck, Christmas Goose, then a Holiday Tug o’ War (which looks oddly similar to a regular tug of war).

The PAX finished off with a couple of new-to-us Mary exercises. DR PAX from F3 RVA Bieber gave us Toy Soldiers, which consists of holding a six-inch low-plank while tapping toes on the ground. Very painful, sir. Then Liverpool, distinguished DR PAX from F3 Carpex gave us the protractor, in which pax assume their six, then call out angles that their legs must conform to (e.g., 30, 60, 90, 15, we even had a 5 and a 3, which seemed about the same to YHC) around the circle, similar to a ring of fire.

Time caught up, and we were complete, except for the formalities.

COT: It’s Christmas Eve and we are thankful for all who posted today! Remember the reason for the season – for Christians, it’s the birth of our savior. Whatever your belief though, it’s a time to give back. Giving to others makes us all feel better inside, and when we feel better, we do better for those we serve. When we serve, we become better people, and that is what we all must do — become better in whatever role we play in life. Amen and Aye! 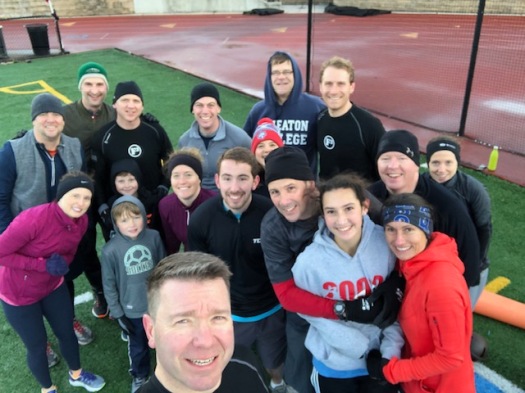